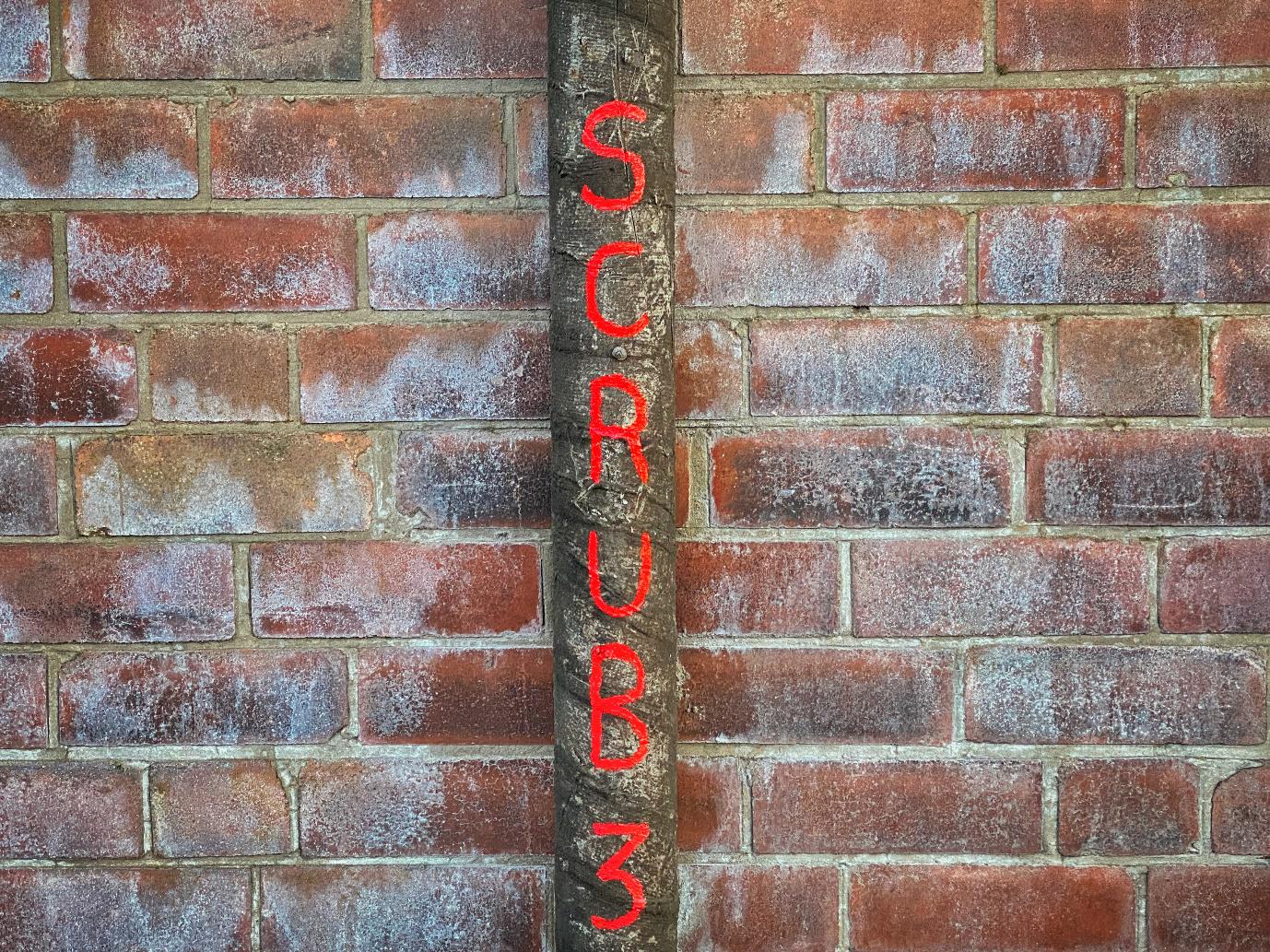 Projects | Diary 5: The last entry & a letter from Simon Buckley

Diary 5: The last entry & a letter from Simon Buckley

This is the final Winter Hill Diary entry. When I started planning this project last year, it was my intention to walk Winter Hill with a range of people, exploring the conversations that crossing the terrain opened up between us, exploring the story of the Mass Trespass of 1896. Yet during the course of carrying out the walks in 2020, the Covid-19 pandemic struck. Our relationship with landscapes both external and internal, physical and emotional was shifted, irrevocably. Lockdown in March suddenly meant that the edgelands suddenly came much closer to home, within walking distance… and I could no longer access Winter Hill.

At first, I wondered if my project was therefore futile. When would I be able to walk the hill again? I also had started sending a series of ‘Winter Hill letters’ from January onwards, postage penned either on the hill or shortly after walking it, delivered to people across the world who have inspired me and asking if they too could photograph the letter to a place that inspired them. Initially, I thought this could not carry on either.

Then, I reflected. Realised how entitled my thoughts were, how I assumed my physical access to the hill was an automatic, something I could rely on. Winter Hill after all was subject to a historic public access campaign, beginning with the Winter Hill Mass Trespass of 1896 and it taking 100 years until public right of way was granted; as recorded on the mass trespass commemoration stone on Coal Pit Road – the road of disputed access. I reflected more on the frustration that those thousands of people joining the mass protest procession must have felt, that frustration thickened with a deep love for the land, the place, carried on throughout the twentieth century. Now the lockdown and social distancing measures at the time of the Covid-19 pandemic have brought to light many more questions of public access, how many places close to us still remain in private hands, and causing many to question their connections… both to place, and each other. It has been a difficult time for so many people, a loadedness that language cannot grasp, only infer; sacrifice, upset, fear. Daily walks have seemed to become a new solace… people stepping into place, their local areas, in whole new ways, carrying thoughts of other places, people, times, with them.

Over the course of this project, my perception of what constitutes place has been substantially shaken. ‘Place’ no longer ‘where I go to’ – again that ‘I’ of entitlement – but instead location as layers of history, emotions, perceptions, perspectives near and far. A palimpsest of location that extends onwards. Hence the writing inspired by Winter Hill continued when I could not physically access it, the hill even more of an edgeland… for access matters too in the mind, how we think of and appreciate an area, recognise our part in it but move away from appropriation. We all are part of place, and that part to play is ever-more urgent, the importance of responding to issues from littering to climate change. In turn, the Winter Hill letters continued during lockdown, often taking the form of postcards written reflecting on a particular aspect of the hill. Some of the recipients kindly shared their photographs of their postage in place, areas closer to home, even within the home… all part of the same structure that Winter Hill is part of, that we all walk (or experience) together.

And so I came to the final Winter Hill Diary entry. Although Winter Hill Diary 4 with Jennifer has an introduction written in lockdown, the material was already recorded from our much earlier walk in February. But the walk of the hill I had planned to carry out with the artist and my dear friend Simon Buckley, sadly could not take place. So I wrote Simon what would be the final Winter Hill letter, written shortly into lockdown, reflecting on my sadness of not being able to share the hill together.

But yet, share the hill we have. For Simon and I decided to explore the inspiration of the hill further, the pull of the place, by engaging with this edgeland on the journey to another. June 2020, the final month of the Edgelandia project, marked the creation of an artistic installation from the Manchester-based musician Lonelady. Her Scrub Transmissions 3: DEMON, hosted by The Social Gathering, took the form of her own recording of a piece of music, embedded into the landscape itself, next to some long-weathered graffiti of the word DEMON on Manchester’s Gorton Road. It was on my local run to this remarkable installation that I left the last Winter Hill letter, the last to be received, along the route for Simon to collect. And it was to DEMON that Simon took and photographed the Winter Hill letter, our experience of the hill entering in from the edges and bringing to surface so many more areas for conversation as well as conservation. Underlining the importance of what it is to think of a place, its history, and rather than taking physical access for granted, exploring the past of place and considering the capacity for change, in all of us, and in the future.

Below is the text of my Winter Hill letter to Simon, written on the 28 March. I originally typed the letter and was going to send it by email at the time, as at that early stage in lockdown, I was worried about using the postal service and I felt that the typed form also reflected how people were increasingly turning to digital means to connect. Yet rather than send the letter then, I waited until the 16 May, printing it out and leaving it for Simon to collect on the route to DEMON, so he would be the last recipient. Simon’s written response, as well as two photographs taken by him, follow my letter, and then a collage of Winter Hill photographs, provided by the named recipients in a place that inspires them. Some of the photographs date well before the lockdown, others during… all encountering Winter Hill from another edge.

I sincerely appreciate everyone who has been involved in, supported and shared their thoughts about this project throughout its course. This would not be what it is without you. Thank you.

This is the last Winter Hill letter. A letter written at a time when, in a different world, we could have been out on the West Pennine Moors; our plan to go there for dawn, to watch the slow ooze of the sunlight seep over the horizon. Egg yolk in a black pan, as my grandad would have described it.

There is black now. Black in more ways than one. Right now it would be a public offence for me to go to Winter Hill, considering the government measures introduced to implement social distancing in the face of the Covid-19 pandemic. The clotting of fear in our thoughts, movements. This is the first weekend in effectual ‘lockdown’, the emphasis that people exercise only locally, in proximity to their homes. The message of that was emphasised just yesterday on the 27 March, the same day that Winter Hill again, tragically, burned. The fire was believed to have been started by a barbeque, people seemingly using the place as a playground in the unusually bright weather.

I felt powerless, seeing the pictures start to circulate online, across social media… a strange physical ache at the place projected in pain through pixels, burnt black. It would perhaps fuel headlines in a few local papers the next day. But even newspapers are becoming ‘harder to get hold of’ – a phrase people are increasingly using now – our physicality stuttering, scrabbling, attempting to grasp… yet lacking grip. Increasingly now too, our interactions are from the edge, the internet, an interface; a layer, multiple layers, over the landscape of what is. Impacts of events feel blunted, like the clumps of heather on the hill are half-shorn, tips seared off by flame like cauterised antlers. Growth becomes twisted.

As we intended to walk the hill at dawn, I wonder at the photographs you might have taken. For your images do not just ‘capture light’ or a moment, but when I look at them, I am held in place… there is a physicality, almost an intimacy in the camera eye. We enter place and place enters us, we are held in it. That is a place of solace, in itself, as I sit in my room here in Hulme and think of the hill.

I wonder what we would have talked about, threading over the footsteps of other walkers, wanderers, miners, mass trespassers, farmers. The faded steps of soles stretching back to the Bronze Age still burning in land-lock. The touch of time, its uncrystallised aura, in the terrain we all move within, are part of. Perhaps we would have considered that, the contours in the map only a rough translation of the clasp of cold earth. Or perhaps we would have stood and felt for that moment, our smallness, the physical force of the place perhaps underlined in the phrase – it takes my breath away.

Interesting, the terms we use to describe our reactions to place, particularly the places often beyond our everyday surroundings; breath-taking, awe-striking, stunning. All of these words suggest an overwhelm, a physical wrench through the senses, an obliteration. And yet breath too is what we are all fighting for. It seems that even the hum of the media does not diminish what is stacked in our subconscious; the knowing that although we are finite, we are part of place, place is part of us. Sharing the Edgelandia project at this time, feeling the response of others to it, has meant a great deal… I’m very grateful.

People often allude to the ‘time after this is all over’ as ‘a new dawn’. But the dawn will come regardless, as it always does, place continues. Perhaps it is instead the dawning within ourselves that will change, a reflection of the places, near, far, within ourselves, that we have pushed to the edges. And learning to embrace them.

Thank you for the inspiration, support and our friendship, Simon. I miss you, and am sending all my very best to you and your family,

As part of her Edgelandia project Emily and I were due to walk Winter Hill near Bolton at dawn, but we never did. Before we had chance, the Covid 19 pandemic arrived, and we were locked into our homes, the hills that surround this city now out of bounds. And so, instead of walking with each other across the West Pennines, we decide to travel separately to a shared destination, in search of a scruffy east Manchester street where a wall daubed with the word ‘Demon’ indicates the location of a stone, under which lies an envelope, placed a day or so ago by Emily .

We took different routes to be here, but, in the dusk, we’ll both feel the same roiling emotion as we listen. It’s a city that rewards effort.

I find the letter and open it. Inside is a printed sheet written on 28th March , just after the lockdown began, and already an evocative document of suspended time. As I read her reference to ‘the touch of time’, my brain fills with tumbling questions, and for a second I see a different life. I’m only here in this moment because of the other places I was absent from. And I miss Emily, mourning the walk that never took place.

A series of ‘Winter Hill letters’ sent to people across the world who have inspired me, from January onwards, penned either on the hill or shortly after walking it. Below is a gallery of all the letters, photographed in their recipient locations. Please click to browse through. 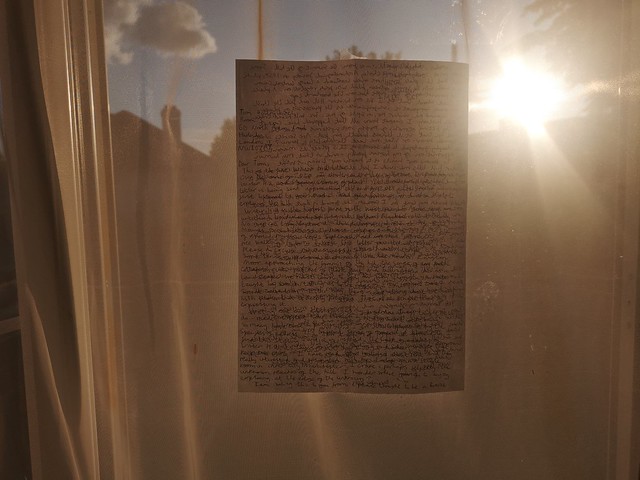